October has been a busy month for SeaWorld Rescue. Our veterinary and care teams have been working tirelessly to ensure the manatees in our care are reaching their goal weights and getting healthy so that they can return to their natural environment. To that end, we’re happy to report we were able to return two healthy manatees this month! 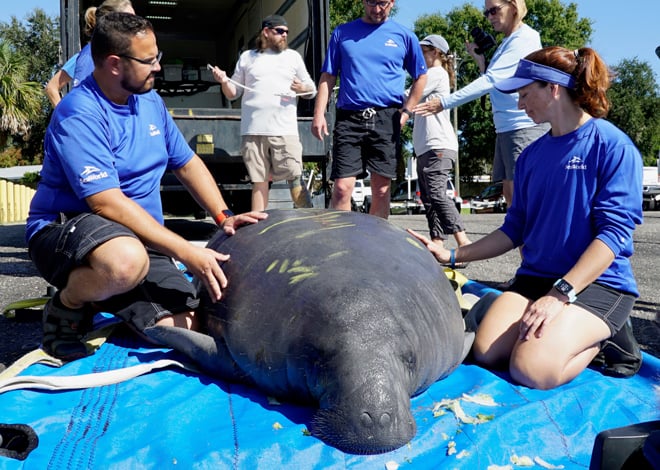 Astoria came to us in May as part of the Unusual Mortality Event (UME) currently taking place among Florida’s manatees. She was rescued by our partners at Florida Fish and Wildlife Conservation Commission (FWC) after being found beached and underweight and was brought to us for immediate care. While under the watchful eye of our veterinary and animal care teams, Astoria thrived. She quickly began to gain the weight back and we were thrilled to see her glucose levels rise as well. After about five months with us, she was finally ready to head home, and on October 19th, our rescue team and partners returned her to her natural environment. She was outfitted with a satellite tracking device from Clearwater Marine Aquarium so we can keep an eye on her progress.

Named for the way her head moves from side to side, Tick Tock is another female manatee that came to us back in March after being struck by a boat. This poor girl suffered from nine broken ribs, which caused an air pocket to get stuck between her skin and intestines. Because of this, she was unable to submerge herself in the water and needed support. Under the care of our dedicated team, Tick Tock slowly began to gain weight and return to her normal swimming habits. With the help of FWC, our team successfully returned Tick Tock back to her home on October 25th. Watch Tick Tock’s story on TikTok (see what we did there?) if you want to learn more about her rescue: https://www.tiktok.com/@seaworldorlando/video/7023116975291272454

In addition to the two returns, our team was also called to action the morning of October 26th to assist with the rescue of a lethargic male manatee. The manatee was observed having trouble breathing and floating near the Freedom Boat Club. According to FWC, the manatee started to drown and they suspected the cause was due to toxic red tide exposure. Thanks to the quick-thinking civilians, they were able to keep the manatee’s nose above water while rescue teams arrived. As our team monitored him through the night, the effects of red tide started to lessen and he began to demonstrate normal behavior. We are continuing to monitor his progress to ensure he gets healthy and can return home.

We’re lucky the teams got there so quickly, making these critical care cases manageable. We are now entering cold-stunning and red tide seasons, which means Florida’s manatee will be at greater risk for illness and injury. SeaWorld’s rescue and care teams – as well as our partners in the Manatee Rescue & Rehabilitation Partnership – are mobilizing and preparing for all possible outcomes. We’ll be keeping a close eye on these events and will jump in to support when called upon. In the meantime, we’re focusing on educating the public on the plight of the manatees in the month of November, sharing information on the work being done to support their survival and how civilians can help.

It takes a village, and awareness is an important piece of the conservation puzzle.

To report a manatee in distress in Florida, contact the Florida Fish and Wildlife Conservation Commission’s Wildlife Alert hotline at 1-888-404-FWCC  (1-888-404-3922).The Manatee Rescue and Rehabilitation Partnership also offers a helpful list of what to do to help a stranded manatee. 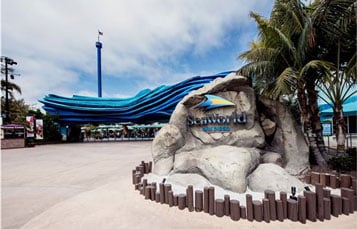 Over the course of the last few days, we’ve had quite a few inquiries about the changes SeaWorld Orlando’s undergoing from a signage perspective. 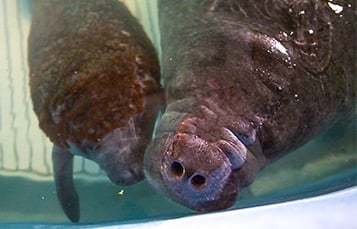 For 45 years SeaWorld has been committed to the rescue, rehabilitation, and return of manatees. With the species being somewhat unique to the eastern seaboard – and many being right outside our doors in Florida – they hold a special place in our hearts. 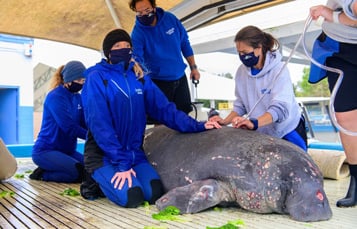 November marks the start of National Manatee Awareness Month, and it couldn’t come at a more critical time for the species. Florida’s manatees are currently experiencing an Unusual Mortality Event (UME) – a larger than normal number of fatalities among a given marine mammal population.