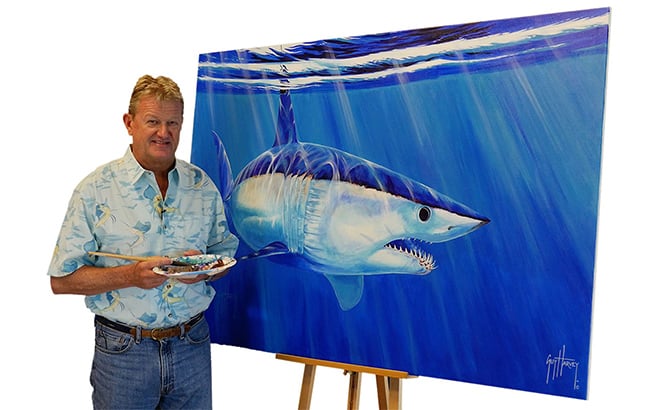 You may recognize his name from the line of colorful apparel that fishermen everywhere love to sport but Guy Harvey’s passion for the oceans goes much deeper than the renowned art he creates.

His passion for the ocean since a young age not only inspired him to draw, but fueled a burning interest that prompted a formal education in marine science. Though he gave up a budding career as a marine biologist for that of a highly acclaimed artist, Guy has continued his relentless pursuit to unravel the mysteries of the sea, traveling the world to better understand, protect and conserve the ocean and the habits of the marine wildlife he paints.

That passion is also seen in SeaWorld’s global conservation efforts, bringing these two organizations together for a common cause.

Today, Guy Harvey and SeaWorld Entertainment, Inc. announced a new partnership focused on ocean health and the plight of sharks in the wild. Together, they will work to raise awareness of these important issues, and collaborate on science and research to increase understanding of how to better protect these critical predators and their habitats.

“SeaWorld is committed to raising awareness of the plight of sharks in the wild and the oceans they live in. As part of our commitment that we made in March of this year, we will put meaningful dollars, research and man hours towards reducing this troubling trend,” Joel Manby, President and CEO of SeaWorld Parks & Entertainment said. “The Guy Harvey Ocean Foundation and Guy Harvey Research Institute have been front and center in this effort for years, and we are proud to open a new chapter in those efforts today.”

As part of the new partnership, members of SeaWorld’s animal care team recently joined a Guy Harvey Research Institute shark tagging expedition off the coast of Mexico, tagging six Mako sharks over the course of four days. Those tagged sharks will be followed by students and researchers at Guy Harvey’s Institute at Nova Southeastern University, and can be viewed by the public online at GHRItracking.org.

“The partnership with SeaWorld will ensure our ocean conservation messages and our efforts to protect Mako sharks reach a broader audience here in the United States and worldwide,” said renowned scientist, marine wildlife artist and conservationist Dr. Guy Harvey. “We are thrilled to gain the support of the SeaWorld team as we continue to bring educational initiatives and conservation efforts to life.”

In addition to the science and research efforts, Guy Harvey and SeaWorld will also work together to increase public awareness about the need for shark conservation. SeaWorld’s new roller coaster, Mako, will be a major platform for this effort.

In the queue lines for the new coaster, guests will be educated and entertained through digital platforms that provide access to the real science of sharks in the wild and ways they can help protect them with Guy Harvey himself as the host. Elsewhere in the realm guests will have access to real-time shark tracking and videos from Guy Harvey’s vast library of compelling and visually stunning shark expeditions. Interactive materials will also share information about shark conservation and ways to get involved.

Guy Harvey will also commission an array of exclusive paintings and apparel, which will be available only at SeaWorld.

Plus, a portion of the proceeds will go directly to the Guy Harvey Ocean Foundation. 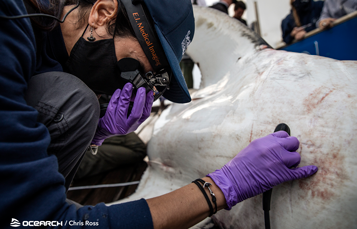 SeaWorld Veterinarian and Reproductive Physiologist Dr. Gisele Montano recently joined the global non-profit organization OCEARCH on an ocean research expedition off the coast of the Carolinas. Dr. Montano shares more about SeaWorld’s partnership with OCEARCH and her experience on the expedition. 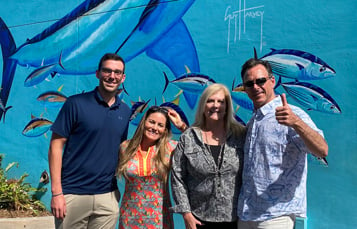 How SeaWorld Rescues Wildlife in Danger

Late last month, the Guy Harvey team joined us at SeaWorld Orlando to get an inside look at the work the SeaWorld Rescue team does day in, day out. The team met with various animal care specialists and shared their experience with us.

Conservation
Animal care
Partners
Are you sure you want to delete this item?