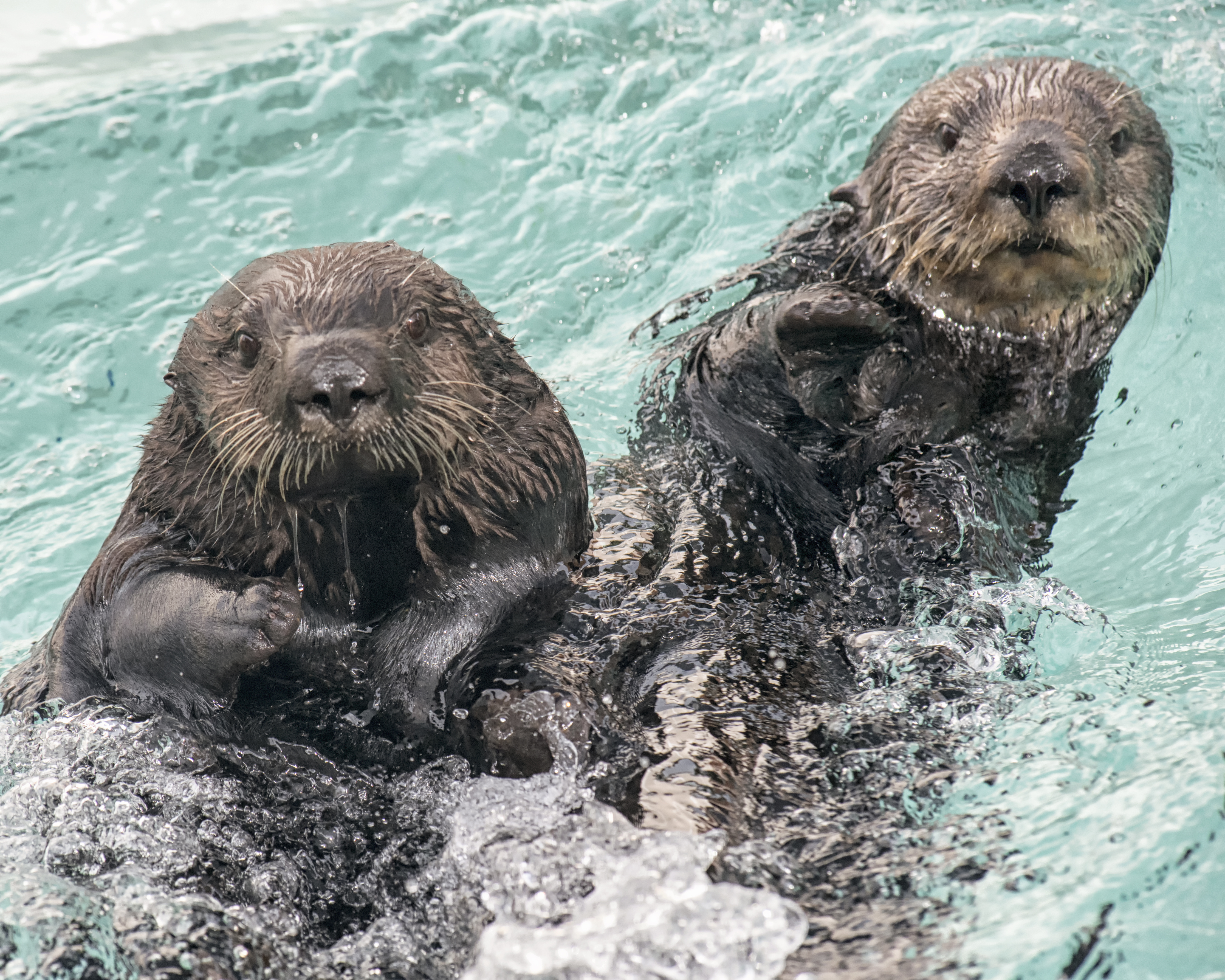 California's southern sea otters are a keystone species that has been listed as threatened under the Endangered Species Act since 1977. These otters were once hunted to near extinction during the maritime fur trade in the 18th and 19th centuries, and even though populations have slowly recovered worldwide, they still stand far below their historical numbers. Today, there are approximately 3,000 southern sea otters in existence.

Over the course of our history, SeaWorld has rescued and rehabilitated many sea otters, some of which currently reside at SeaWorld San Diego. This May, we welcomed 15-year-old Abby back to our otter family. Abby’s story is an interesting one: stranded on Jalama State Beach in northern Santa Barbara County at just three days old, she was rescued by the Santa Barbara Marine Mammal Center and transported to SeaWorld San Diego for rehabilitation. There, she was successfully hand-raised by our expert animal care team, and by age three, started showing signs of maternal behaviors towards the younger otters. Understanding that Monterey Bay Aquarium had a need for a surrogate sea otter mom for their Sea Otter Surrogacy Program, we partnered together to give Abby a chance to put her maternal skills to work. Abby resided at Monterey Bay Aquarium as a surrogate from July 2012 and retired in 2019.

Abby is just one of six otters that live together at SeaWorld San Diego’s Otter Outlook. Each of the six otters – Abby, Clover, Coco, Mocha, Nova, and Pumpkin – have distinct personalities and are loved and cared for by our dedicated animal care specialists. Learn more about each otter below:

Abby gets along very well with each of her five counterparts and is always willing and wanting to learn. Her absolute favorite thing in the world is laying in piles of ice (and eating ice!) She also enjoys playing with manipulation items (like her red frisbee sparklets bottles). If there’s something she doesn’t like, she absolutely will let you know.

Clover got her name when she arrived at SeaWorld San Diego on St. Patrick’s Day in 2011 after being rescued in the Monterey Bay area. She is known amongst her care team as being a bit more dominant than the other otters and prefers her solitary time more than the others. She likes eating slurry when frozen in ice cubes and enjoys smaller kong toys for stuffing crab claw tips. She is also known to pick favorites among her care team.

Coco is known for her blond head and dark body. She was originally rescued in Cayucos, north of Morro Bay, and came to SeaWorld for permanent residency at 3 months old after she was deemed non-releasable. She enjoys chewing on ice and spending time with Mocha.

Mocha was rescued as an orphaned pup at just 4 weeks old in Davenport. She came to SeaWorld at 8 weeks for medical care and long-term treatment. She is one of the more mellow and more maternal otters of the bunch, which is why she’s often the first otter new residents meet. Mocha loves her small rubber balls and kongs, and like Abby, enjoys laying in piles of ice. She’s often seen hanging out with Coco.

The youngest of the group, Nova was deemed non-releasable after her second rescue, where she had suffered wounds from a shark bite, and came to us in March 2020. She likes placing her shellfish on deck while eating and spends a lot of time with Pumpkin. Of all the otters at Otter Outlook, Nova has the darkest coat. She’s also considered amongst her care team as being the most inquisitive and fearless of the bunch.

Pumpkin is the smallest otter of the group. She was rescued the day she was born and still had her umbilical cord attached. When she was only a few weeks old, she came to SeaWorld for round-the-clock care because of low birth weight and lethargic behavior – two indicators that she was likely born premature. These days, Pumpkin enjoys rearranging furniture in the habitat and playing tug of war with car wash streamers as part of her enrichment. She’s considered to be the slowest eater of the group, and definitely does not like crab bodies, although she will eat the legs and claws.
Animal care
Rescue 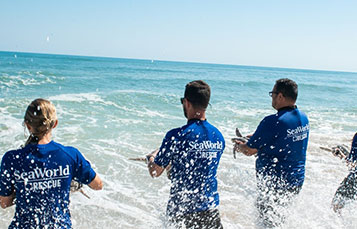 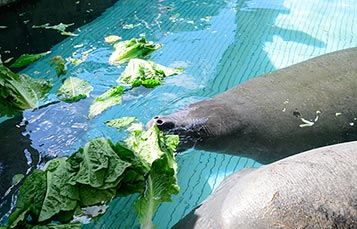